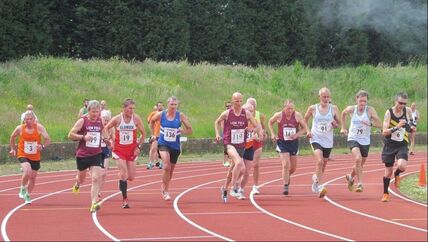 Dates for the 2022 season​
All fixtures will take place at Monkton Stadium, Jarrow
NEMAA Track and Field League
NEMAA Track & Field Championships
NEMAA/NECAA Pentathlon Championships
All BMAF 2022 Fixtures + European & World on the BMAF website
Entry fees for the league remain at £5 this year. This allows you to enter up to 3 events (plus any non-scoring events you may wish to participate in) and is great value for money. You must enter and pay online by 5pm on the Friday prior to the event using the entry link on the main track and field page. Start lists will be available to view before the match - these will also be linked on the main track and field page - this will allow you to arrive on time for your heat. NO ENTRY ON THE DAY.

​A Season Pass is also available again this year - still priced at £25 and great value for money for six matches and up to 18 events (plus any non-scoring events you may wish to enter).

​NB: The Weight and the Walk (2k/3k) will not count in the League and Individual competitions. See League rules below.
Results will be available online shortly after each event - see our Results page.
​NEMAA TRACK & FIELD INTER-CLUB LEAGUE SERIES 2022 - RULES AND INFORMATION

The first Group A throw event will start at 6.00pm (warm ups at 5.30pm). The first Group B throw event will start at 6 pm. All "second group" events scheduled after 6pm will be on a follow-on basis, e.g. Javelin B will follow on once Javelin A is completed. This will also apply to the triple jump and the weight events. Track events at 6.30pm, apart from 2km and 3km walks which start at 6.00pm (warm ups at 5.30pm). Please register and warm up early for first events, remembering to adhere to health and safety rules and Covid regulations (long throws must only be made under supervision of an official).

IMPORTANT CHANGES
The 4 main throwing events will be divided into two sections – Group A & Group B.

Group A will be limited to no more than approx. 15 competitors who have reached a standard of at least 19 metres for Javelin, Discus and Hammer and 7.50 metres for the Shot. If more than 15 athletes have reached this standard, the group will be limited to the first 15 athletes entered.
Competitors who have attained  their own age group standard - even if it's less than 19m and 7.50m - may also compete in Group A  (eg: M80+ / W65+ )
Group A will be allowed 2 trials then a further 2 trials if their age group standard is attained. If a competitor does not attain 19 metres (7.50 m Shot) in their first three attempts, or their own age group standard (whichever is the lower), then their competition will be deemed to be over.
Age group standards can be viewed HERE

Group B will be for competitors who have not reached a standard of 19m & 7.50m.  (This new rule is due to the very large number of competitors). The first Group B throwing event will start at 6.00pm. Group B throwers will be asked to take their warm up throw immediately prior to their two consecutive trials - this will speed up the event and allow competitors to move to their next track or field event more quickly.​ The first throw will be marked with a peg but not measured at that point. The second throw will be measured if it exceeds the peg distance - if not, the first throw will then be measured by using the peg marker.
Throws that do not reach the grass area in front of the cage will not be measured.
Throwers will compete in the order in which they arrive at each event.
Group B competitors should be competent in the more technical technique of the Javelin and Hammer and may be challenged by the judges if they have not reached a minimum level of ability and safety.
If they attain their age group standard they may join Group A at the next fixture.

Weight events – (the heavy ball on a short chain) are restricted to competitors who have obtained their age group standard. Points scored in these events will NOT count towards individual awards or in the team competition.

Competitors must wear the club vest of the club they represent at all the Track & Field League fixtures. Failure to do so will result in disqualification.

Competition will be in 5 year age groups for men & women - O35, O40, O45, O50, O55, O60, O65, O70, O75, O80,O85 with the top six in each event scoring points irrespective of the number of competitors in each event as follows : 6 points for 1st position, 5 for 2nd, 4 for 3rd, 3 for 4th, 2 for 5th & 1 point for 6th. Each club may enter as many competitors in an event in any of the age groups but only three competitors per club per age group may score points. The Walk events and Weight events are non-scoring events. In order to qualify for the team competition - clubs must consist of at least 4 competitors for Men or 3 competitors for Women at each meeting.

All competitors must be paid up members of NEMAA prior to the fixture, or may compete as a guest if a member of another area Masters club (will not be eligible for league points).
NEMAA Subs and New Member applications may be accepted on the day at the discretion of George Routledge, the Membership Secretary (not at the first meeting). However, it is preferable to pay in advance:- membership renewals and new members can now pay online by credit or debit card on this website (see our online shop) or by post with cash or cheque.

The entry fee for each fixture will be £5.00. Entries for individual matches must be received by 5pm on the preceding Friday.

Members may enter a maximum of three events each night, plus any non-scoring events. Members may enter the series at any of the six fixtures. The numbers (worn front and back) allocated to each member at their first registration should be kept and used at all NEMAA Track & Field League fixtures as well as the NEMAA Track & Field Championships. If you lose or forget your number, a new set must be purchased for £3. Competitors MUST compete in their own age group.

As everyone will be pre-entered, start lists will be available to view before the competition HERE - this will allow you to arrive on time for your heat. Competitors who are taking part in both the first field and track event must make their preparations and practice trials - and if necessary - take their first trial in the field event before going to the start of the track event. In track events, competitors – male and female together – will be seeded into races. The order of seeded races  will be – slowest first.

In the Throws events – competitors will be divided into two groups –A and B – based on their ability. Group A competitors will be allowed two trials and a further two trials if their event age group standard is achieved.
In Group B - throwers will be allowed a warm up followed by two consecutive trials. The first throw will be marked with a peg but not measured at that point. The second throw will be measured if it exceeds the peg distance - if not, the first throw will then be measured by using the peg marker. If Group B throwers achieve the event standard they may be asked to compete in Group A in the next fixture.
​Throws that do not reach the grass area in front of the cage will not be measured.
​Competitors, with prior consent from the Registration Official, may compete in an event in a younger age group – but only as a guest. Such competitors in throwing events must use the younger age group weight of implement. 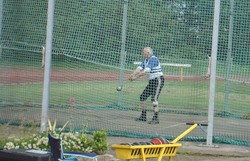